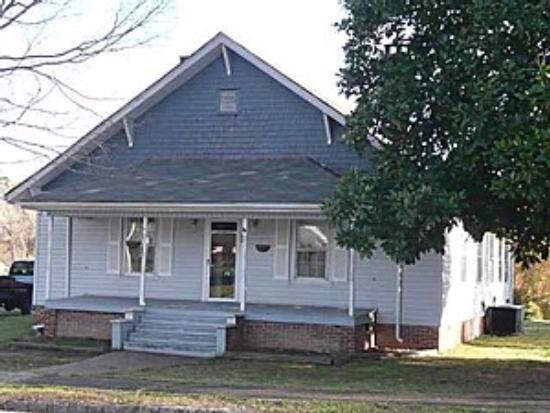 The families that worked in the mill could rent a house from the Mill Company. The size of your house depended on the size of your family and your position in the mill. There were several different size houses. A large family might get a house with five rooms and a large hall. A smaller family might get one with three rooms that was one end of a duplex house. These houses had a separate entrance and porch at each end. A medium size family might get a four room house, with no hall, by themselves.  There were numerous outside designs for the houses.

There was a group of houses in Victor Park for supervisors and other specialty employees of the Company. These were mostly large two story houses with large yards.

All of the houses were well maintained by workers hired by the Company. There were teams of painters whose main jobs were to paint the houses inside and out. There were also carpenters, plumbers and electricians that handled any problems in their field.

The mill houses were probably more comfortable than the average South Carolina house during the 1930's and 1940’s. All of the houses had running water and inside toilet facilities. However, it was not until after World War II in the late 1940’s that the houses were fitted with bathtubs. 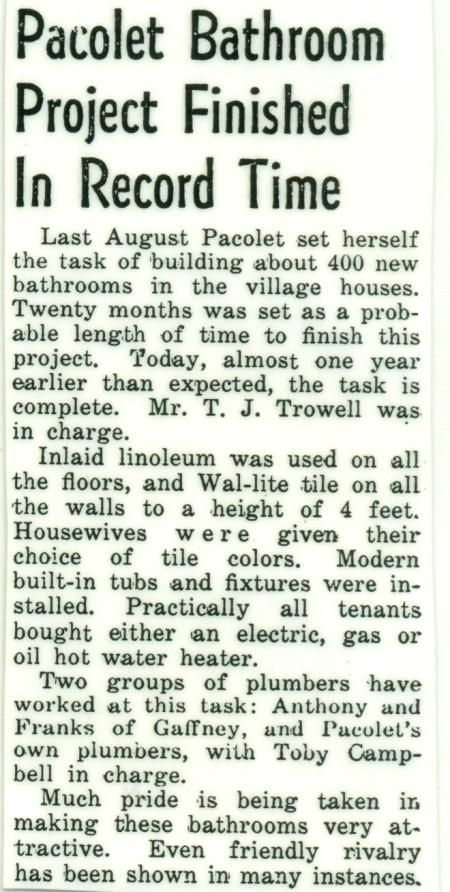 
The original basic heat for the present houses was a coal fireplace in each room. Every house had a coal pile and depended upon deliveries of coal throughout the winter. Later, in the 1950’s, many houses had a coal or oil heater connected to the fireplace.

The kitchen cook stove in most of the houses at first, I think, used wood. Later these were changed to kerosene or electric stoves.

Then, and now, wide sidewalks connected the houses all over the town. Almost everybody took these for granted as we did the excellent system of storm gutters and drains. The gutters and drains protected the town from heavy rains. In the 1940’s a heavy rain would leave many Upcountry towns in a sea of mud but that was not the case in Pacolet Mills.


This web site has been started as a public service to share the story of Pacolet. The web master and person to contact about putting information on the web site is me, Gerald Teaster.  Contact me at:
gteaster@pacoletmemories.com or by telephone at (843) 873-8117.  My regular mail adress is:
1311 Jahnz Ave.
Summerville, SC 29485

See more information about my Pacolet connection at Gerald Teaster.